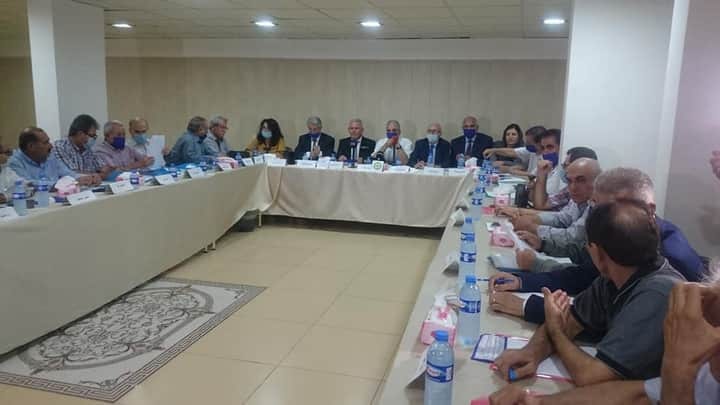 The “Peace and Freedom Front” is a political coalition consisting of – the “National Kurdish Council” in Syria, the “Assyrian Democratic Organization”, the “ Arab Council of the Euphrates and Al-Jazeera” and “Syria’s Al-Ghad movement”.

The Front contains bodies aligned in their goals and political vision and have established mutual trust through cooperation and common interests.

The Front stresses that its work and the work of the bodies making it, does not conflict with their membership in the opposition platforms that work through the Syrian Negotiations Committee and others.

The Front makes effort to open up and work with all the opposition democratic bodies in order to find a common ground between the various political organizations and coalitions, and to come up with an inclusive project that actualize Syrians ambition in achieving drastic change and build a modern State, suitable for the level of the sacrifices Syrians made.

The Front works according to these principles

1- Syria is an independent sovereign State, its sovereignty originates from its people – the source of all authority. It hold the principle of equal citizenship, separation of power, independence of jurisdiction, role of law and the peaceful transition of power, through fair and free elections.

3- The Front affirm its commitment to acknowledge the Kurdish ethnic identity in the constitution and to consider the Kurdish cause an integral part of the National cause and to acknowledge the Kurdish ethnic rights – with emphasizing Syria’s unity, its people unity and geographical unity. The Front works to cancel all racist policies and practices against Syrian Kurds and to treat their ramifications, and to restore nationalities to those revoked and compensate those damaged and return rights to their rightful owners.

4- Commitment to human rights and all charters related in the political, social, economical and cultural arenas.

5- The Front sees in “Non Centralization” the suitable way to manage the nation – keeping in regard, the absolute geographical unity of the Syrian Nation – thus protecting the multiracial/cultural aspect, all the while guaranteeing increased public engagement and fair distribution of authority and resources and achieve long term balanced development throughout the Nation, which may requires reworking administrative divisions.

6- The Front affirms its commitment to the political process led by the UN to achieve a political solution according to the international law, in particular the resolution No 2254. The Front affirms that it is part of the National Syrian opposition, and works with all the regional and international sides involved in Syria to stop the war, end tyranny, restore the peace and achieving Syrians ambitions in freedom, justice and democracy.

7- The Front works through peaceful means to achieve peace, freedom and respecting human rights, and to achieve civil peace, fix the social fabric and restore Syrian brotherhood – brotherhood in justice, equality and full cooperation between Syrians.

8- Cancel all laws, special courts and their rulings. Refuse the demographic change operations – the ones that happened and the ones currently happening – during the Syrian war.

9- Guaranteeing women rights, freedoms and representation in all Syrian institutions, in a percentage no less than 30%.

10- Syria is a democratic republic, working according to the principle of separation of religion and state, unbiased to all ethnicities and religions, acknowledges and guarantees freedom of religion and thought, including the Yazidi faith.

11- acknowledge political pluralism system and freedom of peaceful political work and competition between different political views through the principle of equal opportunity.

12- Working on writing a new constitution for the nation, that all Syrians take part in, and to establish it through general referendum.

13- The Front embrace the principles and practices of transitional justice after achieving the process of democratic transition, as a step on the road of achieving national reconciliation, and to heal the wounds, fix the damage and holding to account all those who committed war crimes and crimes against humanity, and bring them to justice.

14- The duty of the army and security institutions is to defend the homeland and to protect its security, independence, land, its citizens and institutions. They shall work according to the government rules, and it is forbidden for those involved in the line of duty to engage in political work and to join parties and political bodies as long as they are still in service.

15- The Syrian state guarantees inclusive and equal representation in all the national institutions, and guarantees equal opportunities in the political, economical, social and cultural spheres to all citizens.

1- Working on solving the racial issues in Syria via a national, democratic and just solution, according to international law and charters.

3- Working on establishing a long lasting Civil and social peace between the peoples of Al-Jazeera and east Euphrates and throughout the Syrian landscape.

4- Renounce violence and extremism, and to fight terrorism in all of its aspects. To open up to all the Syrian powers and components, and to work on establishing a base for companionship that achieves a true and inclusive national Syrian identity.

5- Support and encourages dialogue between Syrians to open up the space for freedom of opinions and thoughts.

6- Guaranteeing the religious and ethnic interests and to prevent any political, economical and services malice against them. Guarantee their legislative rights through a two chambers parliament, the first chamber is designated for the elected representatives, while the other is designated for representatives of administrations, ethnicities and religions. The duties of each chamber will be assigned by specialists, and to make use of other nations practices in this regard.

7- Demanding the international community and the UN to work immediately and sincerely in order to release the prisoners and to unveil the fate of the missing and the forcibly disappeared. and to open up the paths for humanitarian aid and to allow the refugees and the displaced to return to their native land securely.

8-The Front is planning on establishing a work program in order to communicate with the regional and international powers to explain the Front’s vision regarding the political solution in Syria.

Mountain Lovers Wed above the Clouds in Kurdish Iraq

Afrin.. Woman From Jendres Is Kidnapped

In its first foreign visit, a delegation from the Peace and Freedom Front visits…

The French President receives the President of the Kurdistan region

Security, stability at top of agenda ahead of President Barzani’s meeting with Macron