The Kurdish region in Syria is facing many crises with the outbreak of the Covid-19 in large cities, in light of the failure of the PYD administration to provide basic services to citizens.

On Wednesday, April 7, 2021, Yekiti Media obtained a picture at a petrol station in the town of Girke Lege, it shows queues of cars waiting for diesel fuel, noting that the town is located in the oil and gas fields in Rumailan, and which it is also under the control of the Democratic Union Party. 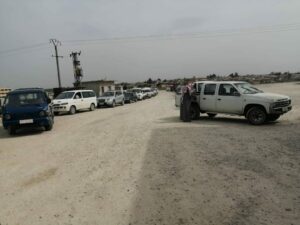 In the city of Amuda, activists circulated videos showing a major crisis at a fuel station, where hundreds of citizens gather to obtain kerosene in light of the lack of domestic gas cylinders.

Most of the Kurdish cities and towns live in a crisis of getting bread on a daily basis, and most of the bakeries and mills are under the control of the Democratic Union Party (PYD) administration, with prices rising dramatically, and the Democratic Union Party had bought hundreds of thousands of tons of wheat in the last agricultural season at cheap prices. In addition, the Kurdish region is considered the Syrian food basket due to the great return on wheat production.

Yekiti Media obtained pictures from the city of Qamishlo of hundreds of residents gathered in front of the bakeries to get bread, while the PYD administration imposed a total ban in the cities of Qamishlo and Hasakah due to the outbreak of the Corona virus.

Yekiti Media correspondent in Kobane said on Thursday April 8, 2021 that the only tourist bakery in the city was closed due to production costs, with the devaluation of the Syrian pound against the US dollar.

The administration of the Democratic Union Party announced the imposition of a total ban in the cities of Qamishlo and Hasaka for seven days and in Kobani for ten days, and a partial ban starting from four o’clock in the rest of the cities and towns with the outbreak of the Covid-19 and the registration of large number of the infected with the registration of deaths also, and observers confirm the failure of the PYD administration In managing the crisis of the outbreak of the virus, especially in providing services to the population, and the lack of large medical centers to treat the infected, and it is limited to limited cities.

The Syrian pound continues to decline against the US dollar, and reached record levels of about 5,000 SYP per dollar in last mid-March, and despite the improvement in the value of the Syrian pound slightly, with the price of 3500 SYP per dollar recorded at the present time, but the high prices of food With the low level of per capita income, it increases the economic troubles of citizens and it doesn’t provides the minimum necessities of life for their children, especially since the salaries of workers in the government of the Syrian regime do not exceed 20 dollars, and the salaries of workers in the administration of the Democratic Union Party are 40 dollars.

Traders close to the Democratic Union Party have a monopoly on trade in the most important foodstuffs, controlling their prices, and fabricating crises every period, in addition to losing them from the markets.

Due to the high production costs, the only Alsyaahy (Improved) bread oven in Kobane was closed