Two days ago, a court of the Democratic Union Party (PYD) in Bilbila town in Afrin, north of Aleppo city in Syria prosecuted two men among a crowd as a punishment  to go to the battlefronts because of arguing and refusing to recruit their  children within the PYD militants.

It is important to mention that PYD militia is going on recruiting young people who are forced to escape and emigrate to the neighboring countries and Europe. 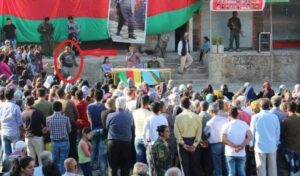 Iraqis fleeing Mosul to Syria, up to 50,000 anticipated: UNHCR

Raids and arrests campaign of PYD militants affecting leaders and cadres of the Kurdish Yekiti party in Amouda: