Coronavirus continues spread across Middle East and North Africa with over 1,600 infected across the region.

The coronavirus first started spreading from Wuhan, China, earlier this year and has since infected nearly 90,000 people, with over 3,000 dead. The Middle East has been hit particularly hard as cases started spreading across the region as travelers returned from Iran, the second deadliest epicenter for the disease after China, with 66 reported dead.

Here is a chart of spread of the coronavirus in the Middle East and North Africa so far: 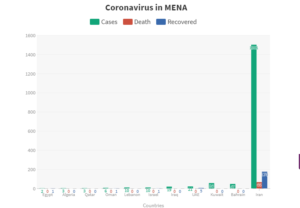 How coronavirus spread from Iran

The first cases of coronavirus were recorded in UAE on January 29, 2019. However, the virus appeared to have been contained within the country, which only has 21 cases to date, and no recorded deaths.

The virus instead spread across the region in late February, following an explosion of cases in Iran which then spread to nearby Bahrain, Kuwait, and Iraq.

Iran itself has struggled to contain the virus, with several officials from the regime falling ill. On Monday, an adviser to Supreme Leader Ali Khamenei died of coronavirus.

While no cases have yet been declared in Syria, officials have begun to prepare for the virus spreading to the wartorn country.

The spread of the virus across the region has hit the economy, with Gulf stocks falling on Sunday and the aviation industry forced to cancel flights.

Saudi Arabia announced it was temporarily suspending visas for Umrah pilgrims to Mecca to prevent the spread of the virus, although the Kingdom is yet to report a confirmed case.

A joint Russian-Turkish patrol in the Kobani countryside