Syrian President Bashar al-Assad said on Sunday the army had been forced to give up areas in order to hold onto more important ones in its fight with insurgents, and the scale of the war meant the military faced a manpower shortage.

In a remarkably frank assessment of the strains afflicting the Syrian military after more than four years of conflict, Assad said the type of war confronting Syria meant the army could not fight everywhere for risk of losing vital ground.

“Sometimes, in some circumstances, we are forced to give up areas to move those forces to the areas that we want to hold onto,” Assad said in a televised speech. “We must define the important regions that the armed forces hold onto so it doesn’t allow the collapse of the rest of the areas.”

Assad has absorbed a series of battlefield defeats since March. He lost most of the northwestern province of Idlib to an insurgent alliance including the al Qaeda-backed Nusra Front, and important areas of the southern region along the border with Jordan to mainstream groups of the “Southern Front”.

In addition, ultra-hardline Islamic State insurgents seized the central city of Palmyra from the Syrian military in May.

The Syrian government’s territorial control stands at no more than 25 percent of the country, with the rest divided among an array of armed groups including Islamic State, other rebel groups and a well-organized Kurdish militia, according to the Syrian Observatory for Human Rights, which tracks the war. But

the state-held area is home to the majority of the population.

Assad said increased support from states backing the rebels — including Turkey — was the reason for recent setbacks that had created “a state of despair” among Syrians. Syria is in a war funded by the richest and most powerful states, he said.

But Assad struck a defiant tone, saying there would be no compromise solutions, and he dismissed the view that Syria was heading toward partition into areas run separately by the Damascus government and armed groups fighting him.

“Everything is available (for the army), but there is a shortfall in human capacity,” Assad said. “Despite that, I am not presenting a dark picture.”

Assad said an amnesty announced yesterday for men at home and abroad who have dodged military service would encourage thousands of conscripts who wanted to join the army but held back because of penalties slapped on them.

Military reversals for Assad have ever more reduced his control beyond the main population centers of western Syria that comprise the cities of Damascus, Homs, Hama, and the coastal region forming the heartland of his Alawite sect.

In the assessment of many diplomats and analysts, Assad has been forced to forgo some far-flung parts of the country to focus efforts on protecting more defensible areas in the west.

Some diplomats say that Iran, his main regional ally, has advised him to retrench.

The army still, however, has footholds in the northeast, the east, and the south, in addition to Syria’s second city Aleppo.

Assad said the idea behind giving up territory was to allow for later counter-attacks. “From a military point of view, holding to this area, or that patch, would lead to the recovery of the other areas.”

The government’s military setbacks have triggered renewed pledges of support from Assad’s main regional allies, the Shi’ite Islamist government of Iran and the Lebanese group Hezbollah, which is fighting alongside the Syrian army.

Hezbollah is playing a central part in an ongoing offensive to drive insurgents from the Lebanese-Syrian border.

Western officials have said the military pressure on Assad could pave the way to a political deal that would see Assad step down as demanded by the United States and other Western states.

Syria’s conflict began as a street uprising against four decades of authoritarian rule by the Assad family.

The U.N. envoy for Syria, Staffan de Mistura, is due to address the Security Council next week on consultations he has held with combatants and other parties involved in the war.

But Assad stuck to the position that any political proposal for resolving the war must be based on “eliminating terrorism” — a broad-brush reference to rebels arrayed against him.

Assad said there were “positive” changes in Western attitudes toward Syria’s conflict – a reference to the U.S.-led air strike campaign against Islamic State. But he faulted the West because, he said, states were still classifying militants fighting him as revolutionaries rather than “terrorists”. 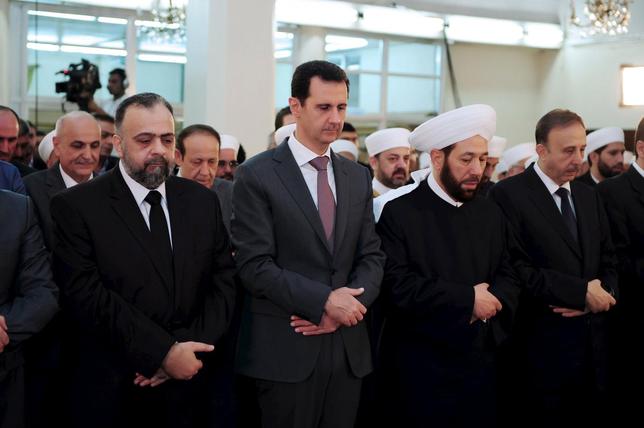 Had been killed by an armed gang on Serbian-Hungarian boarder

Turkey calls Nato talks on IS and PKK