Islamic State poured more fighters into Ramadi as security forces and Shi’ite paramilitaries prepared to retake the Iraqi city that fell to the Islamists a week ago in a major setback for the government.

In Palmyra, the Syrian air force struck at buildings captured by the Sunni militant group, whose arrival has raised fears that the city’s famed Roman ruins will be destroyed.

Islamic State has killed at least 217 people execution-style, including children, since it moved into the Palmyra area 10 days ago, according to the British-based Syrian Observatory for Human Rights. Another 300 soldiers were killed before the Syrian city was captured, the monitoring group said.

The insurgents reinforced Ramadi on Monday, deploying fighters in preparation for battle against security forces and paramilitary groups advancing on the provincial capital, which lies 110 km (70 miles) northwest of the capital, Baghdad.

Iraqi forces have regained ground east of Ramadi since launching a counter-offensive on Saturday, a week after it was overrun, and on Monday retook a rural area south of the city.

Pro-government Sunni tribal fighters, with the help of the army, laid land mines to reinforce their defensive lines around Baghdadi, a settlement northwest of Ramadi which controls access to a major Iraqi air base. Islamic State attacked Baghdadi with seven suicide car bombs on Sunday.

Local man Abu Saed heard a commotion outside his house in the city’s southeastern Officers neighborhood. “I saw two trucks pull up outside with dozens of fighters carrying arms running quickly into nearby buildings and taking cover.”

Another resident said at least 40 fighters had jumped out of three trucks that arrived in the southern al-Tamim district on Sunday evening.

“They were carrying weapons and wearing mostly khaki dress with ammunition belts wrapped around their chests,” said Abu Mutaz. “They were talking in an Arabic dialect, they were not Iraqis.”

The seizures of Ramadi and Palmyra were Islamic State’s biggest successes since a U.S.-led coalition launched an air war against it last year.

The near simultaneous victories against the Iraqi and Syrian armies have forced Washington to examine its strategy of bombing from the air while leaving fighting on the ground to local forces.

In a sharp criticism of Washington’s ally, U.S. Defense Secretary Ashton Carter on Sunday accused the Iraqi army of abandoning Ramadi to a much smaller enemy force.

A spokesman for Iraqi Prime Minister Haidar al-Abadi dismissed the comments as “untimely and surprising at a time when Iraqi security forces are preparing to launch a counter offensive to retake Ramadi”.

The general in charge of Iran’s paramilitary activities in the Middle East said the United States and other powers were failing to confront Islamic State.

“Today, in the fight against this dangerous phenomenon, nobody is present except Iran,” said Major General Qassem Soleimani, who is often seen on the battlefields of Iraq.

But in a move that could mark an expansion of U.S. involvement in the conflict, Turkey said it and the United States had agreed in principle to give air support to some forces from Syria’s mainstream opposition.

Meanwhile, the United States and its allies carried out 10 air strikes against Islamic State militants in Syria and 25 strikes in Iraq since Sunday, the U.S. military said.

Most of the strikes in Syria were in the northeast, near Al Hasakah, while in Iraq, Islamic State positions were attacked near Baghdadi, Bayji, Fallujah and Mosul, among other sites.

Days after taking Ramadi, Islamic State defeated Syrian government forces to capture Palmyra, home to 50,000 people and site of some of the world’s most extensive and best-preserved Roman ruins.

The Observatory said there had been no reports so far of Islamic State destroying Palmyra’s ruins and artifacts.

The militants have proclaimed a caliphate to rule over all Muslims from territory they hold in Syria and Iraq. They have carried out mass killings in towns and cities they have captured, and destroyed ancient monuments, which they consider evidence of paganism.

Iranian-backed Hezbollah has backed Syrian President Bashar al-Assad in his country’s civil war. The group’s leader, Sayyed Hassan Nasrallah, has vowed to clear the border area of Sunni Muslim militant groups that have carried out attacks on Lebanese soil. 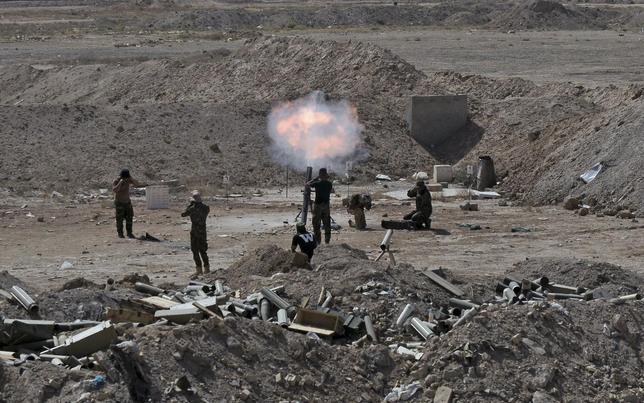 Islamic State: How it is run

Turkey says in deal with U.S. on air support for Syria rebels