On Wednesday 15th, June,2016 , from one O’clock to four some members of the Kurdish National Council in Berlin in Germany were in a sit in front of the US embassy protesting about the Democratic Union Party (PYD) militia violent acts in arresting the leaders and cadres of the Kurdish Yekiti Party in Syria and attacking their homes at night and taking all their electronic machines on 28-5-2016 like Anwar Nasso, Abdulilah Uja, Muhsin Khalaf, Ridwan Hamo and Majdal Haj Qasim as well as some cadres of the Democratic Kurdistan-Syria Party, and kidnapping and hitting the president of the Kurdish National Council in Amouda city in the eastern north of Syria.

It is important to mention that there was sits in Amouda and other Syria Kurdistan protesting about PYD militia acts before and after arresting the mentioned detainees. 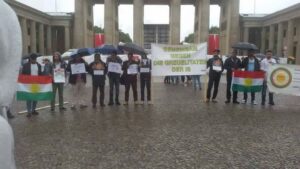 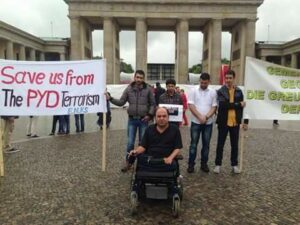 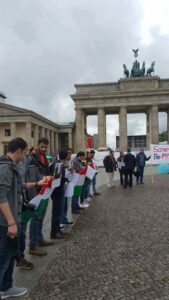