On Monday , May 30th, 2016 the PYD armed group in a white van kidnapped the president of the the local branch of Kurdish National Council in Amouda city , Mr. Yunis Assad, hit him , broke his legs , fingers , injured him and threw him near Derbasiya city / Khanika village . It is important to mention that there was a Sit-in orgnized by Local council of KNC in Amouda demanding release of the detainees the day after . 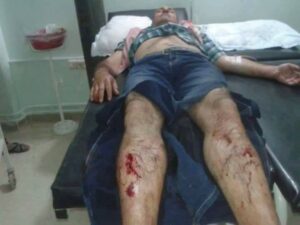