Looking back one year on, the September 25, 2017 Kurdistan independence referendum and the October 16, 2017 Iraqi overrun of Kirkuk were disastrous setbacks for U.S. national security interests.

With Iraq and the Kurdistan Region—America’s key allies in the counter-Islamic State campaign—having fought each other on the battlefield, these partners remain unable or unwilling to coordinate their military actions along their disputed front line, providing the Islamic State with a vital seam to exploit.

Moreover, the referendum and its aftermath left two long-term U.S. partners—the Barzani-led Kurdistan Democratic Party (KDP) and the Talabani-led Patriotic Union of Kurdistan (PUK)—accusing each other of betraying the Kurdish cause by putting Kurdish control of Kirkuk at risk by including it in the referendum, or by cooperating with non-Kurdish groups that spilled Kurdish blood in Kirkuk.

Though Iran aided Iraq in censuring and attacking the Kurdistan Region, the KDP emerged from the crisis more furious at the United States than Tehran, and has since engaged with Iran more closely.

The breach of trust goes both ways: the U.S. government limped out of the referendum and Kirkuk crises holding its own deep grudge against the Iraqi Kurds. Even the traditionally pro-Kurdish Pentagon, uniformed military leadership, and National Security Council angrily refute suggestions that the United States is mostly to blame for the crises, stating that the Kurds were fully forewarned of U.S. opposition to the referendum.

Yet not everyone in Washington agrees. Some congressional leaders and think-tankers (and even U.S. government officials) do view the U.S. government as largely at fault for abandoning an old ally. This difference in opinion has left a deep rift right at the heart of the Iraq policy community that persists until now.

Setting aside who’s right or wrong, we should learn something from this catastrophe. Throughout the past year I have asked senior and working-level officials for their views of what Washington could have done better or differently. This interview process revealed the first lesson of Kirkuk. It was clear that at first, many of the officials did not understood what I was asking. Many simply retold the story of the referendum and Kirkuk from their vantage point, refusing to accept blame or assigning blame to others.

These interviews emphasize the first lesson of Kirkuk—immersed in a virile blame-game culture, we are not well-equipped to self-reflect on our own policy failures. This short piece is an effort to cut through the blame-game and extract key lessons that the U.S. government can apply to future policy planning.

Too Little, Too Late

A second lesson of the crises is that the United States needs to learn more fully how to focus the right amount of effort early enough to shape events. The crises of September and October 2017 prove the wisdom of the adage “prevention is better than the cure.”

Most of the key actors involved would have preferred that the referendum had never happened, or had happened without the highly controversial inclusion of Kirkuk. Most U.S. officials privately admit that they would have done a lot of things differently, or at least more expeditiously and decisively.

As a member of the think-tank community in Washington, I too learned a very important lesson in 2017. For full disclosure, I personally support the right of self-determination and statehood for Iraq’s Kurds, but I felt at the time that September 2017 was not the right moment for a referendum, especially not if it included the sensitive area of Kirkuk. Later, when efforts to head-off the referendum failed, I felt that the U.S. should encourage Iraq and other players not to overreact, not least because the referendum had no administrative effect and was entirely non-binding.

Having returned from one of a number of trips to Kurdistan in early summer 2017, I was possessed of (1) a clear idea of the Kurdish “asks” to delay the referendum; (2) the right U.S. mid-level government contacts to which to convey this analysis; and (3) the remaining time needed for a new U.S. policy to take effect in order to substantially increase the likelihood of a referendum delay.

The problem lay in the fact that the crisis was still months away, so nobody in the cabinet-level U.S. leadership yet cared enough about the issue to really focus on it and speak directly, face-to-face with the Kurds.

Of course, no-one will ever know now whether the independence referendum could have been stopped even with increased U.S. pressure. The Barzanis were clearly willing to take huge foreign policy risks to announce the referendum, defying Turkish President Recep Tayyip Erdogan and ignoring explicit warnings from Qassem Soleimani—the head of the Islamic Revolutionary Guard Corps Quds Force.

But Kurdish leaders were also still entertaining the idea of postponement until close to the end, and the U.S. was the only party credited with being able to broker a deal. Even as the political cost for postponement increased for the Barzanis as July turned to August, very senior Kurdish figures felt deep unease over what was to occur in September even up to the last weeks before the referendum.

In private, these figures were looking for a signal from the United States—not from Iran or Turkey—either a strong enough warning or an enticing enough deal to force postponement, or at least the exclusion of Kirkuk from the referendum.

Instead, without direct U.S. pressure, the majority of Kurdish leadership was able to believe what they wanted to believe (and what pro-referendum advisers were telling them) about the purported real U.S. position on the vote—i.e., the fiction that America would ultimately back the Kurds.

The failure to prevent the referendum was a collective failure in Erbil, Sulaymaniyah, Baghdad, Ankara, Tehran and Washington, yet Kurdish anger focused on America. This might not be fair, but it is a reality and will probably be a reality in other Middle Eastern crises in the future. Most actors expected the United States to prevent the entire episode, which is what should have happened.

Synthesizing the views of a dozen U.S. officials, Washington might have been able to negotiate a postponement with (1) early, resolute, crystal-clear diplomatic action involving a cabinet-level decision-maker and (2) concrete, early commitment to the kind of big gesture that emerged in early September (at too late a stage to make a difference)—the promise of a UN-backed mediation process between Baghdad and Kurdistan, with couched assurances of U.S. support for Kurdistan’s right to self-determination.

The U.S. could have also ‘triangulated’ by encouraging Turkish President Recep Tayyip Erdogan to more directly and explicitly spell out his likely reaction to a referendum. This message needed to be reinforced by a U.S. cabinet-level leader looking President Massoud Barzani in the eyes at any early stage and telling him that when Iraqi forces next attacked, Washington would not protect the Kurds (whether such a statement was true or not). Of course, the United States did not expect the Iraqis to attack after the referendum, partly because of a lack of scenario planning.

The independence referendum became a game of chicken gone horribly wrong and ended in a head-on collision. The United States’ response to this outcome suggests that policy makers did not appear to have put enough thought into the prospect that the Kurds would push ahead, despite (from a U.S. government perspective) the self-defeating illogic of holding the referendum in the face of intra-Kurdish, Iraqi, and international opposition. Even today, the first reaction of many U.S. officials is still to express disbelief at the way the Barzani leadership pressed ahead.

However, if the United States’ ‘Plan A’ was to strike a deal to postpone the referendum, what was ‘Plan B’? Looking back, it’s clear that there was no Plan B, and immediate post-referendum U.S. policy was to sulk and wallow in schadenfreude, letting the Kurds feel some pain because, after all, the United States did warn them.

Officials seem to have figured that the U.S. government would eventually step back in to prevent excesses such as an economic siege of the Kurds or the dismemberment of the constitutionally-established Kurdistan Regional Government. The crisis would dissipate in slow-time.

Unfortunately, Iran and its Iraqi proxies did have a fully worked-out Plan B—the military re-conquest of Kirkuk—and they executed it immediately. The United States was slow to react and did not react muscularly enough, despite having military forces near Kirkuk. These forces’ very presence could have acted as an interposing “trip-wire” and stopped the crisis cold.

Hindsight is admittedly 20-20, but this case emphasizes why it makes sense to put more thought into low-probability, high-impact scenarios. One element of U.S. scenario planning should have involved considering the possibility that our key ally in Iraq—Prime Minister Haider al-Abadi—would simply shut us out of his decision-making during the Kirkuk crisis. I personally could not conceive of this beforehand—a grave analytical failure.

Everything that happened in the September and October 2017 crises was forgivable until Arabs and Kurds spilled each other’s blood in Kirkuk. With blame on all sides, it is important to remember that the killing of our Kurdish allies by our Iraqi allies was a profound U.S. policy failure.

My own key lesson from the Kirkuk crisis is that as a think-tanker, it is not enough to know what the problem is, identify the solution, or be able to inject this view into the heart of the U.S. policy-making process. To have real positive impact, you need to be able to focus senior cabinet-level leaders on an issue and a policy solution before it has become the crisis of the day, and this is extremely difficult.

This challenge is what defense strategist Assaf Orion calls “front-loaded urgency”—being able to anticipate a risk, then put significant effort into prevention at the point on the timeline where preventative action stands the best chance of success and at the lowest cost.

Front-loaded urgency in U.S. policy would not have guaranteed a better result in the 2017 crises, but it stood a better chance of saving everyone the grief of the post-referendum backlash and the Kirkuk military crisis. The direct and focused mobilization of a cabinet-level U.S. official, sitting nose-to-nose with the Kurdish leaders, would certainly have been a worthwhile investment of effort, in comparison to all the picking-up-of-the-pieces and hand-wringing that followed the referendum and Kirkuk crises.

I certainly wish someone—perhaps me, perhaps someone else—had more effectively made the above case to a senior U.S. cabinet member in early summer 2017, when it might have done some good.

YPG claims responsibility for explosion in Afrin city according to statement 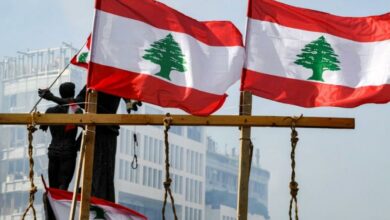 State of Collapse: Can Lebanon’s ‘Purported’ Rulers Save the Country?