One of the Yazidi women abducted and raped by Isis has told of her harrowing experience in a new book.

Nadia Murad, recounted how she was one of approximately 7,000 Yazidi women and girls abducted from their villages in northern Iraq during the group’s advance in 2014.

The terrorists stormed the Yazidi stronghold of Sinjar where they ordered the men to convert or die and took the women to be sold into sex slavery.

Isis, who follow a brutal, distorted version of Sunni Islam, believe the Yazidis are devil worshippers because they worship a peacock deity.

The then 20-year-old, who was captured from her village of Kocho, was forced to watch as members of her family were driven away in trucks and heard loud bursts of gunfire for over an hour.

Six of her brothers and her mother were killed in the massacre – though two of her family survived with serious wounds – and she was forced to get on a bus to be taken to Mosul.

Writing in her memoir, The Last Girl: My Story of Captivity, and My Fight Against the Islamic State, she described how the sexual violence began the moment she got on the bus as one militant reached out to grope her breast.

“It felt like fire. I had never been touched like that before . . . my tears fell on his hand, but still he didn’t stop”, she wrote.

She was then taken to a slave market where she was lead away by a judge who said she was his going to be his fourth sabiya (sex slave) and repeatedly raped, The Times reported.

Ms Murad said while she was held captive in the judge’s house she was treated with horrific cruelty – being subjected to rape and beatings every day.

She described how she was ordered to epilate, wear make up and put on a party dress to serve tea to guests.

At other times he would hit her if she shut her eyes while being raped and he forced her to lick honey from his toes.

After a few days she attempted to escape but was caught and was gang-raped by six of his guards as punishment. 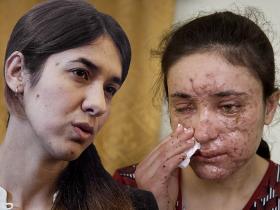 She was then to subjected to more abuse as she was past around to other militants: “You don’t know who will open the door next to attack you, just that it will happen and that tomorrow might be worse.”

Ms Murad was eventually able to escape when her captor’s left the house unlocked while he was out. She was then taken in by a neighbouring family who managed to smuggle her out of Isis territory.

From there she went to a refugee camp in Duhok in northern Iraq where she first met Western journalists and was eventually one of 1,000 women selected for a refugee programme run by the regional government of Baden-Wuttemberg in south west Germany in 2016.

From there she began an activist and was nominated for a Nobel Peace Prize in 2016.

Writing in the book, she said: “I want to be the last girl in the world with a story like mine”.