Iraqi security forces are driving out Isis fighters from the government compound in the centre of Fallujah, the city 40 miles west of Baghdad which Isis has held for two-and-a-half years.

Heavily armed Interior Ministry police units say they raised the Iraqi flag over the main government buildings on Friday, including the police station and court houses, in the latest stage of an attack that began on 23 May.

Clouds of smoke were rising from the centre of Fallujah as it was hit by airstrikes and artillery fire, while Isis snipers in the General Teaching Hospital tried to pick off advancing government troops.

After a week of heavy fighting on the outskirts of the city, a government spokesman said that Isis resistance had weakened. The offensive is led by elite federal police and Counter-Terrorism Service troops advancing along Baghdad Street that bisects the city, which had a population of 300,000 before it was seized by Isis in January 2014. The number of the government forces has been put at 20,000, the majority of whom belonging to the Shia paramilitary Popular Mobilisation Units (Hashd al-Shaabi).

Some 90,000 civilians remained in the city at the start of the present assault, of whom 68,000 have fled, many of them over the past twenty-four hours since Isis reversed its previous policy of forbidding anybody to leave on pain of death.

Witnesses say that Isis was announcing by loudspeakers that everybody could leave, leading 6,000 families to depart on Thursday alone. Two bridges over the Euphrates River were opened, allowing people to get away from the city centre.

But displacement camps have been overwhelmed. The former mayor of Fallujah before the Isis takeover, Issa al-Issawi, who now resides outside the city said: “We don’t know how to deal with this large number of civilians.” 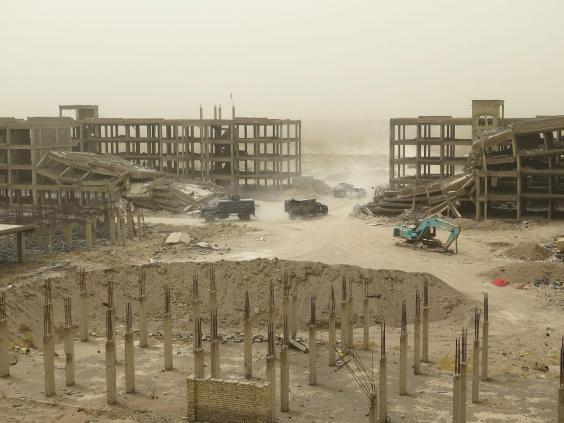 The exodus of people from the city was also enabled by Isis fighters suddenly retreating from important checkpoints inside Fallujah witnesses told the Norwegian Refugee Council.

The nature of this retreat is important because it could mean that Isis leaders have decided not to risk suffering devastating casualties among their experienced fighters by resisting to the last man in the face of an attack backed by US-led airstrikes which was bound to win in the end.

Syria conflict: US diplomats press for strikes against Assad