Though migration levels from Libya are no higher than they were last year, European governments are terrified that the closure of the refugee route from Turkey to Greece will lead to a fresh surge through the north African country towards Italy.

Over the past few days, these fears prompted western leaders to discuss a two-pronged response. First, Rome proposed the deportation of Italy-bound migrants back to war-torn Libya. Then Barack Obama agreed at a meeting with European allies to add US ships to ongoing anti-smuggling operations in international waters off the Libyan coast. 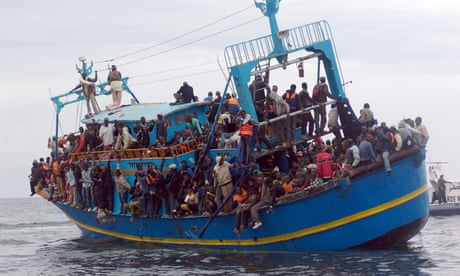 Libya’s people smugglers: inside the trade that sells refugees hopes of a better life

Italy’s defence minister, Roberta Pinotti, told Italian media that a Nato-led anti-smuggling mission could be in operation as early as July. But such haste may have both practical and ethical pitfalls. For a start, western navies may not be able to do much against smugglers if the latter stick to international waters. By this point, senior smugglers have left their boats in the hands of either expendable juniors, or co-opted migrants.

Even if Nato gets approval from Tripoli to enter Libyan waters, they will still struggle to make an impact. Most migrant boats from Libya are rubber inflatables that carry no smugglers and are boarded from the country’s shore. Only a ground presence could stop their departure: by the time these dinghies are out at sea, there is little a naval mission can do to apprehend the smugglers who sent them.

Some migrant boats are repurposed wooden fishing boats. A naval mission within Libyan waters might stand a slightly better chance of subverting this model, but not by much. To load migrants on to the wooden boats, smugglers moor them a couple of miles out to sea, and then bring the migrants there in rubber dinghies.

In theory, western navies could arrest the smugglers while they wait on board the wooden boat for the migrants to arrive. But this would be hard: today’s smuggling vessels are yesterday’s fishing trawlers. To catch the smugglers, Nato would have to either stop every Libyan fisherman – or bomb whole fishing ports.

Deporting all migrants to Libya would also prove tricky. It is currently claimed by three rival governments, while an Isis affiliate controls part of the country. The internationally recognised government, which is the west’s only logical partner, could not operate from the Libyan capital for weeks, and the control it exerts over the country’s institutions is still loose. In purely practical terms, it’s not clear how easily it could facilitate the deportation of tens of thousands of people – or how willing it would be to do so. 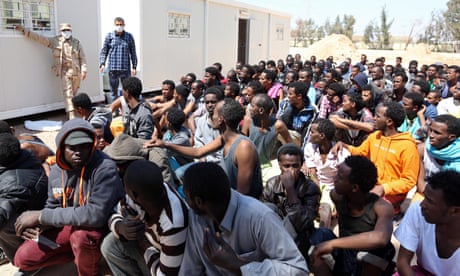 Risking death in the Mediterranean: the least bad option for so many migrants

In ethical terms, a deportation deal would be diabolical. Libya is a war zone. It has no means of welcoming refugees, and migrants have almost no rights or legal recourse. Many fall into modern day slavery, held captive and abused by kidnappers, or sometimes their employers. Those held in nominally state-owned detention centres live in squalid conditions with no access to lawyers. Former inmates previously interviewed by the Guardian claim to have been sold by camp officials to militias and even smugglers.

Until these myriad abuses are solved, demand for smugglers is likely to remain high, whether or not western navies enter Libyan waters. “It is not our choice to penetrate the sea,” an Eritrean nurse detained inside a Libyan detention centresaid in an interview last year. “But if the government won’t help us, if UNHCR won’t help us, if no one can help us, then the only option is to go to the smugglers.”

Syrian warplane 'shot down' after flying over Isis-controlled territory