At the edge of Freedom Square, in the centre of Kobane, you witness the full cost of the stand taken here against the Islamic State (IS), and it is humbling.

Looking east, the devastation is near complete. Every building, home, shop and street is ruined.

On a wall, above the collapsed lecture theatre of the city’s cultural centre, an IS sniper, Abu Tarab, has written in Arabic a promise to the town: “Blood, blood, beheading, destruction.”

IS delivered on part of his promise, but not fully. Kobane is broken, but it is not beaten.

The last word goes to the Kurds. Underneath the IS graffiti, a fighter has written: “Kobane is the graveyard of the Islamic State.”

A few yards away the corpses of three IS fighters rot beside the crater from a coalition airstrike. The force of the blast tore them to pieces – a skull lies in the gutter. 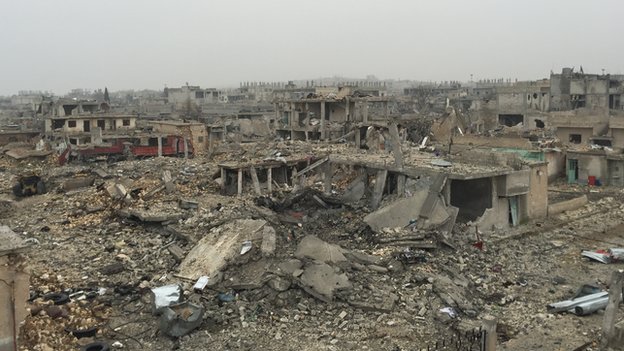 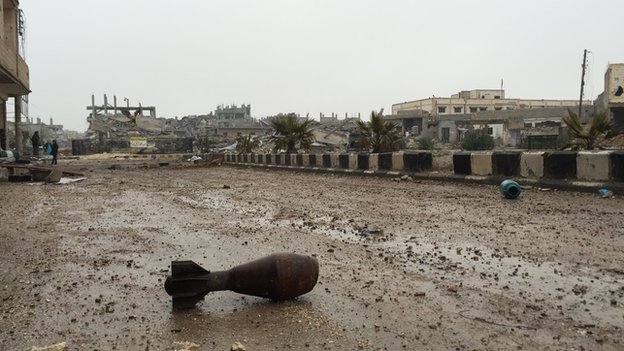 Throughout the town heavy steel mortars, many still live, can be seen rusting in the streets 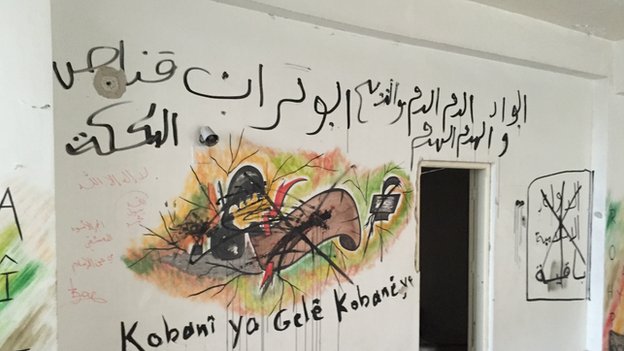 Danger all aroundFor months IS and the Kurds faced each other, sometimes just yards apart.

There are still plenty of dangers here. Throughout the town, heavy steel mortars, still live, are rusting in the streets.

Almost comically, a tailfin protrudes from a wall or a pavement. IS may be gone, but it is not safe for people to return yet.

“These streets tell that with foreign help IS can be defeated, but only at great sacrifice”

It is the Kurds who are left standing, some with trophies from the fight.

I meet one fighter who proudly unfolds an IS flag from his jacket. He tells me the jihadists used car bombs, packed with explosives to target Kurdish checkpoints.

More than 40 car bombs in total, “that’s more than they used in Mosul”, says another man.

From the same Iraqi city, the militants brought heavy weaponry, artillery and tanks, for the fight here.

Hundreds of Kurds died in the battles, but more than 1,000 IS fighters perished. 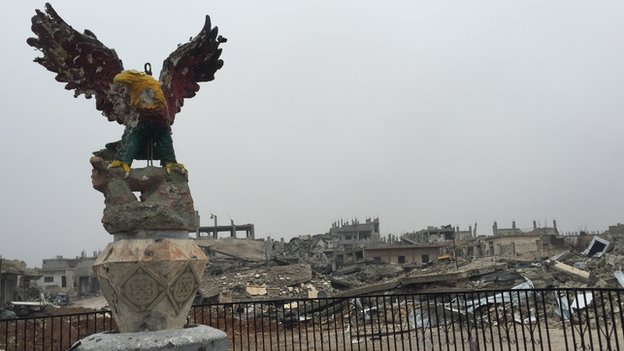 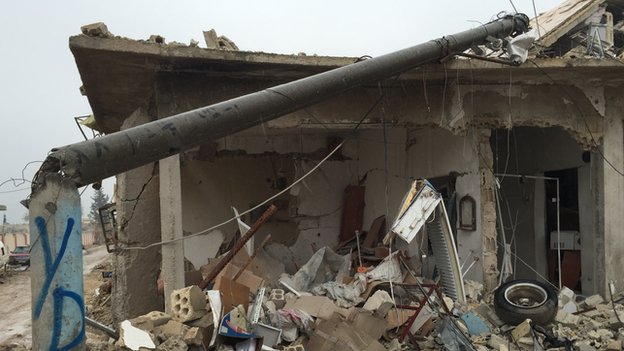 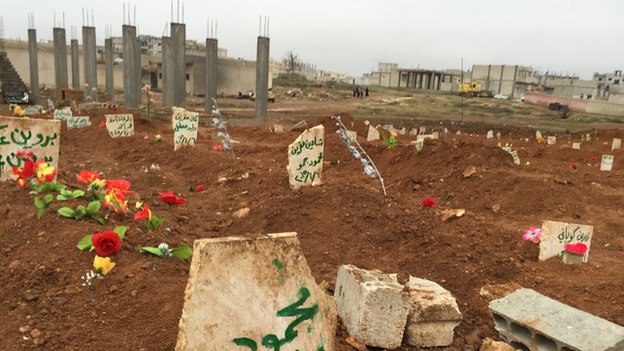 This bleak, makeshift cemetery has become a resting place for fallen Kurdish fighters

Most of its people fled Kobane. Those who stayed draped curtains across the roads, to hide out of sight of IS snipers.

Throughout the fighting, enduring the cold and the dark, Rahima and her 12 children and grandchildren would not leave.

“We faced difficulties,” she said. “We were hungry, we were thirsty but we are no different from the fighters.

“They stayed, and we stayed – we were in the basement, when they had food they shared it with us. It was hard, but thank God, we knew we would win.”

Her grand-daughter, Leyla, sits up proudly, when I ask her if she was afraid.

“Those who haven’t seen the evil that took place here, will see it now,” the 12-year-old said.

“Kurdish officials didn’t abandon us. We are going to school now. And we are very happy because we will be able to go back to our villages. They liberated our lands,” she added proudly.

Heavy priceThere is silence now in the town and what is left of its streets, with only occasional gunfire underlying the fact that Kobane is at peace. 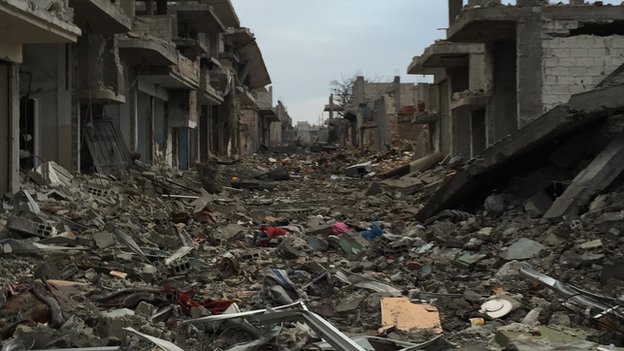 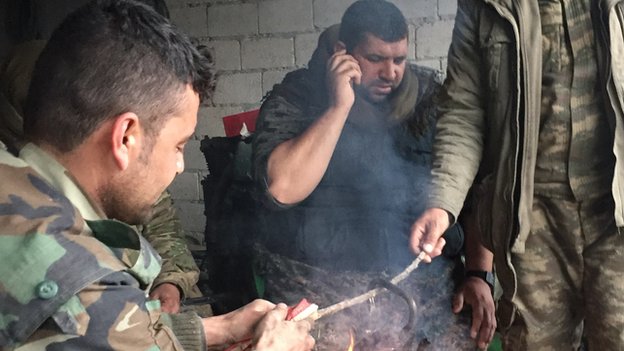 Kurdish fighters are now consolidating their hold over the town

But driving the IS from here came at tremendous cost. Hundreds of coalition airstrikes have flattened most of the town.

And the IS did not go far, they are less than five miles (8km) from here. So while Kobane has been liberated, the fight against the militants goes on.

In the west, between buildings that were once under construction, a graveyard for Kurdish martyrs occupies the mud.

Plastic flowers stand brightly and on the headstones are the names of the dead carefully written in green paint. 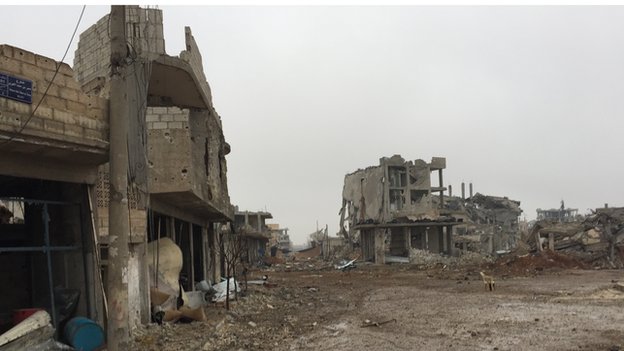 Most of the population fled the advancing IS forces, but some families who stayed managed to survive

I head east, closer to the front lines, Here the Kurdish fighters are young and determined. But still on three sides, they are nearly surrounded by the IS.

“The town has been liberated. It’s a big victory. But the bigger win will be to free all the villages around Kobane,” a fighter says.

“We will never allow a single IS fighter to survive in Kobane, in any villages and anywhere in our land.”

Back at the green gate, by the railway line that separates Syria and Turkey, the sound of coalition aircraft can be heard overhead.

It is dark and there is low cloud, but suddenly, four loud and distant explosions. On the frontline to the west, the war against IS continues.

It is a war for which the battle for Kobane will be remembered. These streets tell, that with foreign help, IS can be defeated – but only at great sacrifice. 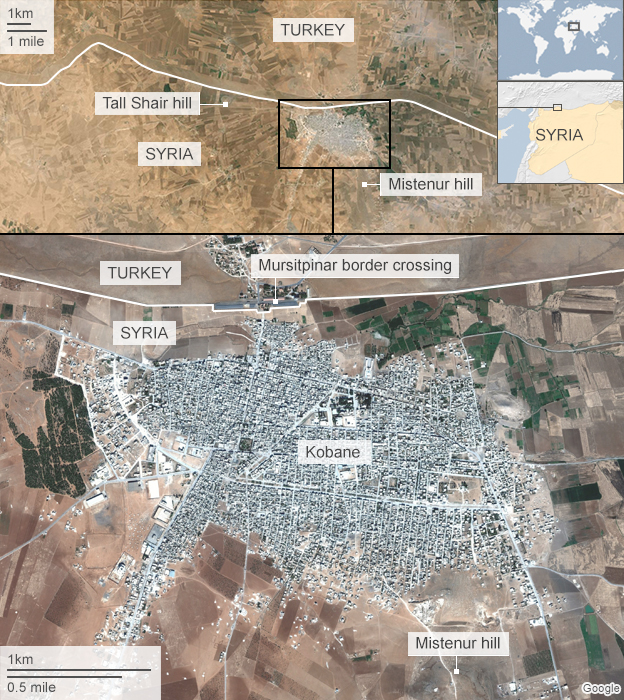