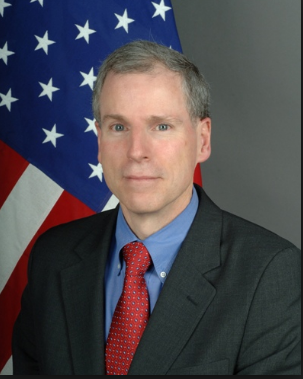 Robert Ford.. Robert Ford is a former US ambassador to Syria and Algeria and a senior fellow at the Middle East Institute for Near East Policy in Washington

Previously, the American sanctions blocked financial transactions of Syrian entities and American companies that worked with them without official permission. Last week, however, the Trump administration imposed financial sanctions for the first time on foreign companies that work with the Syrian government and some of its high officials; Washington struck companies in Canada, Austria, and Lebanon. US officials said they would add more names to the Caesar list during the weeks to come.

American university professor Steve Heydemann who has worked on the Syria file for years wrote an analysis for the Brookings Institute last week that stated that the Caesar sanctions may be the “straw” that finally forces the regime to accept change. Another analyst, Elizabeth Tsurkov, wrote that American officials think the Caesar sanctions will increase pressure on the Syrian economy, widen divisions inside the regime, and bring it to collapse. These thoughts sound more like hope than analysis to me. The Syrian economy is suffering more than ever.

Of course, Assad’s pursuit of a military victory against the 2011 uprising most destroyed the Syrian economy but the US has also played a role. Its arms to the Free Syrian Army prolonged fighting. And the exchange rate which was 50 Syria lira per American dollar in 2011 now is about 2,800 in part because of the American sanctions. The sanctions will impede investment in construction and energy, and decline in those sectors will add to the unemployment and inadequate infrastructure that will hurt regular Syrians. It is strange to hear officials in Washington deny that the sanctions will hurt Syrian citizens since the goal of the sanctions is to increase pressure generally on the economy.

I don’t have much hope for Syria. My analysis is that the Assad government and its powerful four Mukhabarat (intelligence) agencies will not accept reforms or accountability for their terrible crimes. In comparison with the Syrian opposition, the government has stayed united. There is no clear alternative to Assad and President Hafez al-Assad designed the existing system to make a coup d’état almost impossible.

Even if there was a successful coup d’état against President Assad, would Washington drop Caesar sanctions if one of the Mukhabarat generals took his place? The answer is no. Washington demands that the Syrian government change its behavior, stop murdering citizens, stop repressing critics, and accept the rule of law. The Syrian security apparatus will fight a long time before it would accept any accountability. It has no incentive to surrender.

In Iraq in 2003, the Americans destroyed Saddam Hussein’s Mukhabarat and imposed accountability. No one will do that in Syria, certainly not Russia or Iran. I see no way to convince the existing security apparatus to stop fighting without some type of amnesty that all sides accept and respect.

President Bouteflika had faults but he implemented amnesties that the brutal Algerian military intelligence and Algerian fighters accept, and thus the long Algerian civil war ended.

So far, we see no sign that the Syrian security apparatus will even accept limited amnesties; it has murdered hundreds of opposition members who received amnesty in settlement agreements.

It is also not clear that the Syrian opposition and its defenders will drop their demands for accountability and justice after all the murder at the hands of the security apparatus and army. The Caesar sanctions arrive at this dead end.

The Trump administration or a Joseph Biden administration probably will maintain and strengthen the sanctions. Syrian businessmen who worked with the regime will lose properties if they abandon Assad like Rami Makhlouf or if they come under Caesar sanctions. Syria will be more and more isolated, and it will resemble North Korea where we sometimes hear reports of malnourishment and even starvation.

North Korea despite economic pressure is still unified, but it is possible to imagine that some regions in Syria under Turkish and American protection will establish local autonomy if the Syrian government hasn’t economic and military capability to force their reintegration.

Some towns in northern Syria are beginning to use the Turkish lira, a development that indicates Syria is losing economic sovereignty. We see the pictures of the victims of the Syrian Mukhabarat that Caesar brought us, and we hope for accountability and justice. Unfortunately, I can only expect that the Caesar sanctions will bring not a solution soon but instead, even more, suffering and despair for Syrian citizens.

France Calls on EU to Discuss Relationship with Turkey

Victims cause by motorcycle bombing in Afrin