Speaker Ismail Kahraman, who is drafting the new charter, also said the new constitution should drop references to secularism, while lamenting the fact Allah is not mentioned in the constitution.

His comments were met by condemnation from the opposition and a brief street protest on Tuesday. 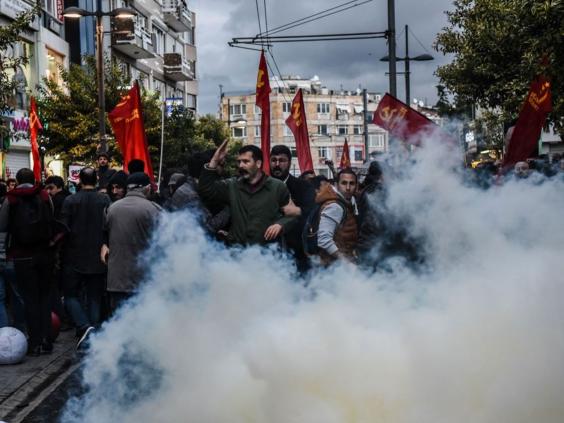 Turkish anti riot police use tear gas to disperse demonstrators during a protest against a call for the country to adopt a religious constitution on 26 April, 2016, at Kadikoy district in Istanbul (AFP/Getty Images)

In the 1920s, Mustafa Kemal Ataturk forged the secular republic of Turkey from the ruins of the theocratic Ottoman empire.

Ataturk banished Islam from the official religion of the state, replaced Arabic with Latin script and promoted Western dress and women’s rights.

However, President Tayyip Erdogan and the ruling Justice and Development Party (AKP) have tried to restore the role of religion to public life.

They have expanded religious education and allowed the head scarf – once banned from state offices – to be worn in colleges and parliament.